Hi,
I hope everything is well with you.
Here's a picture I took the other day, I hopped in the car, and 30 minutes later was watching the sun go down over the sea. 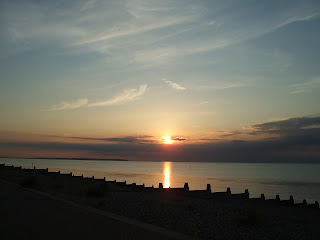 It was lovely warm evening, and as the sun dipped below the horizon, it was nice and quiet except for the waves lapping.
Aah, just like the opening sequence of 'Jaws'.

Only without the massive young-naked-woman-eating shark.
Or more importantly, without the naked young woman...

Anyway the reason I posted it, was because it was an evening that took a deal of stress away from me, and the picture is a reminder of that feeling. That technique of using pictures is dismissed and underused.
The thought of a nice image works well to get rid of moments of stress, but seeing the actual picture itself works even better - any pics you could do with rooting out for a feelgood burst?

Wimbledon started today, with the usual raft of self improvement stories - here's a quick summary...

Andy Murray, the great British hope, having his chances boosted by Rafael Nadal withdrawing. Outside Murray's control, but he's ready to pounce on the opportunity.

Speaking of Nadal, unlucky for him to attain his goal last year, and not be able to defend.

On the womens side, 15 yr old Brit Laura Robson. Having won the girls title last year, she shows a self belief I never had at that age.
At that age it is either natural, and/or as a result of her upbringing. She may well have to come back from knocks in the future, but at present does not have to force herself to believe in her ability.

Many people are not like that, and have to work hard to believe they can achieve. It's well worth the mental effort though, because once you get there it can unleash wonderous things.

There's a load of Russian women at the top that are not household names. Some people say it's boring - what rubbish! There is nothing to stop anyone else putting in the work, and I mean years of work! So good luck to those that have done.

Ok, that's it for now - if I promised not to write about Wimbledon again this year, I would be lying - let's wait and see...!

'Til Next Time,
Health & Happiness,
Gordon
P.S. If you know anyone else who you think would enjoy the
Great Gordino Newsletter, please pass it on to them!

My book - Transform Your Life In 21 Days:
http://www.transformyourlifenow.com
Posted by The Great Gordino at 1:38 PM No comments: Links to this post

The title of this issue is 'Did Dinara Do It?' and no doubt many of you will be asking 'who, where and what now?'
Fair enough, so here goes...

Sat 6th June 2009 saw the final of the French Open tennis in Paris.
Not since 2001 has a womens final even gone to 3 sets, so the hope was that Dinara Safina and fellow Russian Svetlana Kuznetsova could serve up a treat.

Er, no they couldn't, and in fact it was the serve that caused the problem, as Safina's serve was just appaling - it led to a fairly easy victory for Kuznetsova.

So here's the thing - Dinara Safina is the current world number 1 ranked player, but she has yet to win a Grand Slam title, and in tennis unless you pick up one of those babies, you're never considered to be the top.

Saturday was her 3rd Grand Slam final and she has played badly in all of them, so it may look like she never will win one, although it should be remembered that Chris Evert lost her first 3 finals.

So what has all this got to do with goal achievement and self improvement?
Well in Dinara's case I want to go to her chidhood.
Her mother was a top tennis coach, and she vowed that both Dinara and her older brother Marat Safin would be number 1 ranked Grand Slam winners.

That sounds familiar to when Richard Williams decided both his daughters Venus and Serena would get to the top.

Marat retires this year, as a former world number 1, and with 2 Slam titles under his belt, so the pressure is starting to pile up on Dinara.

Not easy, eh? And it shows just how hard some people will work towards their goal, and *keep* working.

Right from childhood, her life has been tennis. Hour after hour hitting balls, physical training, diet regimes, for year after year.
Defeats along the way, and back to the drawing board.

Now, even as world number 1 she has problems. She has had to work so hard at the mechanics of her swing that it now such a mental pressure, it makes it her worst shot, and this in turn is stopping her getting that title.

So, she has lot more work to do, but here's another clue she gave as to what it can sometimes take to get to the top - when she lost there were tears, and no doubt she wanted to rush off court.
However, she was contractually obliged to stand and give a speech to the crowd of 15,000!

With all that must have been in her head, she remembered to thank the sponsors by name.
That's impressive, and shows someone who has the necessary steel to gether through the downs, in the belief that she is powering towards the ups!

Not every goal is as tough as the one she is going for, but by jiminy there is much to be learnt by watching Dinara *not* get her goal!

Ok, that's it for now, I'm off to get my seat comfy for Wimbledon..!

'Til Next Time,
Health & Happiness,
Gordon
P.S. If you know anyone else who you think would enjoy the Great Gordino Newsletter, please pass it on to them!

My book - Transform Your Life In 21 Days:
http://www.transformyourlifenow.com
(remember to click the picture of me at the bottom for the giveaway price!)
Posted by The Great Gordino at 3:14 PM No comments: Links to this post

Hi,
I hope everything is ok with you.

So, Britain's Got Talent finished this week with a whopping 18 million people watching the live final.
With today's media choices, it's going some to get 18 million viewers in the UK!

The favourite was Susan Boyle who had been made famous around the world by the show, but some elements of the media had decided to turn on her in the week leading up to Saturday.

I'm not sure how well the name of Jade Goody is known outside the UK, but Goody was a contestant in Big Brother who was, basically, a bit thick, but went on to be a big celebrity just by being a celebrity. The papers used her to sell issues, and right up to her death from cancer it was a roller coaster of cash for stories.

Let's hope they don't do the same to Boyle, it may sound cynical, but as she was rushed to a clinic on Sunday, I'm sure some newspaper editors would love it if she went downhill on the mental health front - think how much they'd sell!
In fact one of the Britain's Got Talent judges Piers Morgan was an editor at The Sun tabloid paper, and since he had his own family he says he now knows what kind of distress and anguish he caused when he was editor.

Other points to ponder about BGT? Well on Friday's semifinal, one of the contestants was a 10 yr old girl, who was overwhelmed during her performance, and burst into tears.
Very uncomfortable to watch and it akes you wonder if a minimum age needs to be introduced.

Also a dubious side of the show is that acts were put through to the semis who should never have been - they were never going to get any further, and let's be honest, they were being out and out used by the show as cannon fodder.

I can just about see the logic of having bad acts in there deliberately but on the integrity front it does nothing for me, and there were much more talented acts that were left on the sidelines.
No-one said showbiz was easy!

The winners were a dance act called Diversity. I don't normally like dance acts, but this lot impressed me.
Obviously talented, the choreography was entertaining and genuinely creative.

They didn't play any 'hard done by' cards either, they simply expressed pleasure that a lot of hard work had got them reward - now *that's* the kind of story to take from Britain's Got Talent!
Have some belief, take action, work at it, and you could go places you'd never have thought possible!

I'll close with a showbiz story of my own.
I was talking to someone recently about a woman I was seeing a few years ago. I was doing a panto tour, playing Wishee Washee, and it so happened that one of the shows was local. I suggested that the girl bring her kids along to see the show.

It seems her kids had a really good time, but apparently, when I was onstage, her young daughter yelled out to anyone that was listening "I KNOW HIM, HE COMES ROUND AND SLEEPS IN MUMMY'S BED!"

That story makes me chortle - I'm not sure it made her mummy chortle though, she dumped me by text shortly thereafter, saying amongst other things that I had 'looked a bit gay'.

Ok, that's it for this time, I'm off to download a Britain's Got Talent application form...(not) (or maybe yes..?)

'Til Next Time,
Health & Happiness,
Gordon
P.S. If you know anyone else who you think would enjoy the Great Gordino Newsletter, please pass it on to them!

My book - Transform Your Life In 21 Days:
http://www.transformyourlifenow.com
Posted by The Great Gordino at 9:30 AM No comments: Links to this post

Get The Newsletter In Your Inbox!